In the middle of the grasslands,
The bench stands,
Providing a wonderful sight,
To those who want to sit day and night,
Sitting alone, the sights gave her glee,
But most times all she wanted to do was flee.

To discover new lands and seas,
She was ever ready to discard the tranquility and peace,
After years of attempts,
All she managed was trails of discontent,
Breaking new grounds,
A profound truth she found,
‘Jumping boundaries and overcoming situations in crunch,
Unfortunately, always led her back to the same bench’.

Opening both its arms,
The ‘wilderness’ cast its charms,
Enticing her with more dreams and delusions,
Working on her fantasies and illusions,
She threw her watch, preparing for a long haul,
Shattering chimera, she felt the time crawl.
Posted by dilip at 12:06 PM 8 comments

A 75Km Ultra Marathon proved to be one of the biggest challenges I had encountered till date. The physical and mental exhaustion and the pain were indeed beyond comprehension and nowhere near what I had ever imagined. The trail was demanding; the route with multiple uphills and downhills was uneven, and adding to the misery the sun was out in full force. A killer muddy trail that made sure I drew on that last ounce of energy and will power to complete it. But the finish was sweeter because of the fact that I had hardly prepared for it - absolutely no practise, and also the fact that I proved to myself that I had the determination to finish it no matter what. Persevering relentlessly for 11 hours to finish it gives me the utmost satisfaction and the confidence to overcome obstacles. A feeling of ‘ecstasy’ has engulfed me: a feeling that cannot be described in words - just has to be experienced.

Couple of years back when I registered for my first half marathon I thought that was the longest distance I would ever run. But like everything else in life you always want to look ahead and achieve the next bigger thing. That’s what made me attempt my first Full Marathon (42.2Km). But never in my wildest dreams had I ever contemplated on running an Ultra marathon (distances greater than 42.2Km).

Couple of weeks back when I came to know that I was not going to Athens to run the ‘Athens Marathon’, one of my friends suggested me to participate in this Bangalore Ultra event. It so happened that it was the last day for registration and the adrenaline push that came by looking at the distance made me go ahead and register for it (despite the high Rs1700 registration fee!). I had not even prepared for a Marathon let alone an Ultra Marathon. But it didn’t matter because I hardly knew what it would take to run Ultra distances! People supposedly train 3 to 6 months for Ultras. But I didn’t worry too much as my plan was pretty simple - the idea was to keep running.

The event was held this Sunday - 14th November, and the start time for 75km/100km was 5AM. One of the best things that happened was my friend Karthik volunteered to accompany me for the event. I couldn’t have asked for better moral support. As the race drew longer his presence throughout those 11 excruciating hours was a major motivating factor and at the end of it he even ran the last lap with me. He was the support system, chauffer and photographer all rolled into one. Just goes to show the importance of having proper support system to achieve success, especially when you are trying something out of ordinary.

We got up at 3AM, got ready and were off to Hesserghatta (location of the resort where the marathon was held). After some difficulty in finding the resort we managed to reach the venue at 4.55. So I had to literally sprint to the start line. Sharp 5AM the event started and I was off without having an iota of idea till when I would run. I knew I could finish 42km without much fuss but I took special care not to run fast. Conserving energy and maintaining the body so that there are no cramps was the key to sustain oneself for those long arduous hours.

Each lap was about 12.5km around the resort that was mainly grasslands with hardly any tree cover. The trail was muddy and had multiple slopes. The route would have been excellent to cover had it not been for the fact that I was running and the sun was blazing. My timings for each lap gradually reduced from 1.25 hours the first lap to about two hours by the time I finished the last lap.

The middle laps were the most painful as it was in the afternoon with the sun at its peak, and your mind playing games with you and asking you all sorts of questions. Your legs stop obeying you, the pain becomes unbearable and the communication between the brain and the leg becomes non-existent. You decide to run for 120 seconds before the next break (read walking), but by the time the countdown reaches 90 you would be already walking. After another couple of laps you will reach a stage where even though the brain decides that its time to run the rest of the body would be on strike and would fail to just takeoff. Overcoming these things is what makes a true marathon runner and what gives you true happiness at the end of it.

The 6 laps of 12.5Km each totaling to 75Km took me about 10Hours 57Minutes at a rate of approximately 7Kmph.

Running the distance of my life and tasting success while doing so makes this experience truly overwhelming, the pain worthwhile, and my determination, will power and persevering abilities stronger. An experience of a lifetime compressed in those 11 hours. 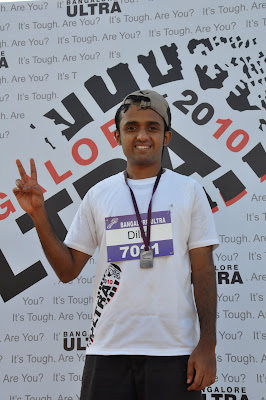 PS: Rest of the photos can be found here… Photos courtesy Karthik.

Update: My official timings is as below..Ranked 6th with an over all timings of 10 hours, 54 minutes...

The Bangalore Ultra Marathon is being held on 14th of November, 2010 and I have registered for the 75Km event! The Bangalore Ultra – conducted by ‘Runners For Life’ gives one an opportunity to test oneself at the ultimate challenge for any marathon runner. And since the Athens Marathon didn’t really work out I felt I had the time to take part in this one. One can participate in any of the 50Km / 75Km / 100Km runs and they give upto 13 hours to complete your run.

The event starts at 5AM and goes on till 6PM in the evening. I couldn’t even properly practice for the Athens Marathon and now I am staring at the Ultra. To be honest I don’t even know what it takes to go beyond 42Km. And considering that a full marathon in itself a big stretch, it will be great fun to push myself beyond my known limits and see how long I can sustain myself. So the idea is to run as long as possible and see whether I can exceed a full marathon distance and if so by how many kilometers.

It’s going to be fun (and ofcourse painful!). My cousins and one my friend are expected to accompany me and give me that moral support...:) But, if any of you are interested to join and check out the venue (or check out a bunch of crazy folks running hours at length) you are free to join..:)

Firstly, I really would like to thank each and every one you who are still reading / checking out this blog despite the long hibernation. The blog has been more to me than just a medium to chronicle events of my life. It has given me much more than the efforts I have put into it. So neglecting something that has given me so much is really a crime…I cant believe that its been 3 months since my last post…So here I am trying to make amends…

Last Sunday was the Athens Marathon and sadly I wasn’t there!

If you didn’t know about my Athens Marathon Plan then you can read about it here. That was about 8 months back and unfortunately after all the planning for all these months, the entire trip had to be cancelled about two days before the marathon. The reason being - my passport was held up by the Greek Embassy who took eternity to issue me a Tourist Visa. They sat on my application for 25 days and few days back they tell me to come for an interview at Delhi on Nov 1st. But, by then the Athens marathon would have been over...

Even if I had gone for the visa, most likely they would have taken another 2-5 days after the interview to give back my passport. So that would mean I would miss the entire Greece trip and would have to go to Spain directly (My next country based on my itinerary)...Anyway because of all the uncertainties and because I was totally frustrated by then (trying to get my visa by contacting the Embassy, vfs office and my agent etc), I decided to cancel my trip...Last couple of days I have been trying to recoup my losses. But since I had booked all non-refundable tickets, I am all set for a huge hole in my pocket without actually going on a vacation..!! Generally the embassy doesn’t call someone for an interview if one is visiting the Schengen region the second time (I had been there last yr). So it was very unfortunate…

My backup plan was to travel to Delhi last Wednesday for the Visa so that I can either come back to Bangalore and travel to Athens as scheduled on Thursday, or travel to Athens from Delhi directly (incase I got my Visa on Friday). But as it turns out both the vfs office and Greece Embassy was off on Thursday (Greek republic day apparently - Not sure what kind of republic they are running!!! :|). Further, later in the evening on Wednesday I got a call asking me to come for an interview on Nov 1st. Considering that they can take 1-5 days after the interview to return my passport and also considering that the marathon will be over by then I decided to cancel my trip.

Atleast my other friends (my fellow runners) all got their visa and finished the Marathon. Anyway there goes a dream of running the Athens Marathon on its 2500th Anniversary! People who contributed to my Sponsorship fund, I really want to thank you for your support. Your contribution meant more than just money, it was really an inspiration! Shortly I will contact you for ways to return back the amount.

Some positive out of the entire thing is that now I have become an expert in not only planning and arranging backpacking trips but also have experience in canceling an entire 3 week itinerary incase some problems crop up. Now, isn’t that good for my backpacking venture?