It was a wonderful day - not too gloomy and not too sunny. The Volvo bus that I boarded was full, an indication of things to come. A lot of preparation had gone into this event and it was clearly showing. As for myself, I was the 42nd person to register, almost 2 months in advance, and I was looking forward to it.

‘Cycle’ or ‘bike’ as people officially call it was my first vehicle to freedom. Not that my parents placed any curbs on my freedom but it always felt good to be independent and go long distances without any dependency on one’s parents or for that matter the public transport system.

I no longer have a cycle and hence had opted for a rented one for the Cyclothon. I had sent mails to many of my friends about this event and the reactions varied. Some enthusiastic friends at office registered even before I could while others wondered whether they could complete the 50Km Armature ride. As far me I just wanted to try it out. It was a long time since I had cycled and this provided another opportunity to experience the feeling. I knew it surely would bring back the buried nostalgia.

It is this very same feeling that the current cycle manufacturers wanted to tap into and hence there were no dearth of sponsorship for the event. The same crop of people who had grown on a cycle had become software professionals with a disposable income enough to spend on high end cycles. Added to this, the current generation wants to go GREEN and of course burn those extra calories that they easily accumulate. This market had great potential and all the manufacturers wanted to tap into it.

The market analysis was perfect as showed by the overwhelming registrations. There were more registrations then BSA-Hercules could handle. They had also made the offer of providing people with cycles on a rental basis for those who didn’t have one and this prompted an increase in participation. But as things become too much to handle, the organizers rejected all these applicants a week prior to the event. I was one of the unfortunate ones…

One of my colleagues sought help from an influential person to get a backdoor entry. I followed his footsteps and called “Go Green Rao”, whose enthusiasm for these activities is contagious. He took it upon himself to get us an entry and actually succeeded at it.

I borrowed a cycle from another colleague/friend of mine the previous day and deposited it at the Koramangala Indoor Stadium for transportation to the actual venue. My colleague & friend Srini was there with me while I was getting it oiled and repaired. When I paid just Rs5 for all the repairs, he laughed and said “In more than a decade you wouldn’t have spent just Rs5 on any kind of repair”! How true was it!

At the registration desk we got a wildcraft goody bag with Rs500 voucher. What more could I have asked? ;)

The next day when I reached the venue, the atmosphere was overwhelming. It was heartening to see so many cycles in and interestingly many had come with proper gear not only for themselves but also for their vehicles. Until that day I had never seen cycle holders on a car at (In my Euro-trip I could see these equipments almost everywhere…). There were more than 6500 participants and the overall turnover was almost 10000. The atmosphere was electric with people very eager to start the event.

We were left from the start-finish line in hordes of 10-20 in order to avoid accidents. The ride itself was very smooth. It was great to ride on NICE road even though there were quite a few steep climbs. Who ever invented gears might be a genius but I prefer to be in top gear and finish the climbs faster. This strategy doesn’t workout in the long run as you will get tired very fast, but again I prefer reaching the destination faster than to cycle with very little output/movement forward (When one is in lower gear climbing uphill is very easy but you will have to pedal more and it will be slow!).

The entire ride took me about one and half hour and I didn’t feel tired at all. At finish line we were welcomed with bananas and water. I had good quantity of both and loafed around with some of my friends for sometime. I could have deposited my bike there and collected the same the next day from Koralamangala Indoor Stadium, but it would have required me to apply half a day’s leave. So I rode back home along with my friend. It took us an hour and 10 min to reach home which was approximately what the Volvo bus took in the morning to reach the venue!! There were huge traffic jams on the way and for the first time I was crisscrossing through it with a grin on my face..:) It is an awesome feeling when everyone is stranded and you ride through the maze..:) By 1PM I was at home and my mom’s delicious lunch was awaiting me…

At the end of the day, the experience was worth the effort and it was quite splendid. But any day marathons are way more tiring and ‘happening’ than cycling!!! Maybe next time I should join my colleagues in cycling to places like to get the actual hang of long-distance cycling… 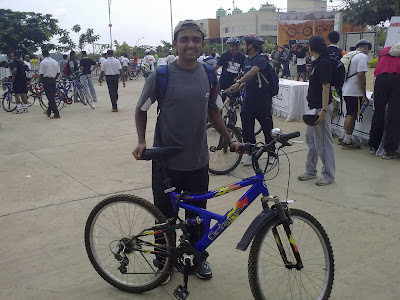 Its amazing how one never gets tired if one is doing what one loves...Its past 3AM and I don’t know whether to go to sleep or simply wait for another couple of hours for my morning jog...Life sure has its ways of telling us what we love, but the question is, do we listen?

One constantly keeps hearing that “Love doesn’t let one sleep”. People might have used that phrase in a different sense but I can clearly see it happening. I am still up and don’t really mind skipping my sleep for the night. The joy that i get from this is much more lasting than those few hours of sleep would have given me...

Love is what you want and once you have found it, it doesn't matter how many fewer hours you get to sleep or how much extra effort you will have to put in. If you love what you are doing, then how can it be “Work”?
Given this, why is it that so few of us pursue what we love? Why is that we fear leaving our comfort zone? Why is that we get lazy and give up trying..? Isn’t it kind of an irony that as we get older the ‘maturity’ is us prevents us from chasing what we really want to achieve...?